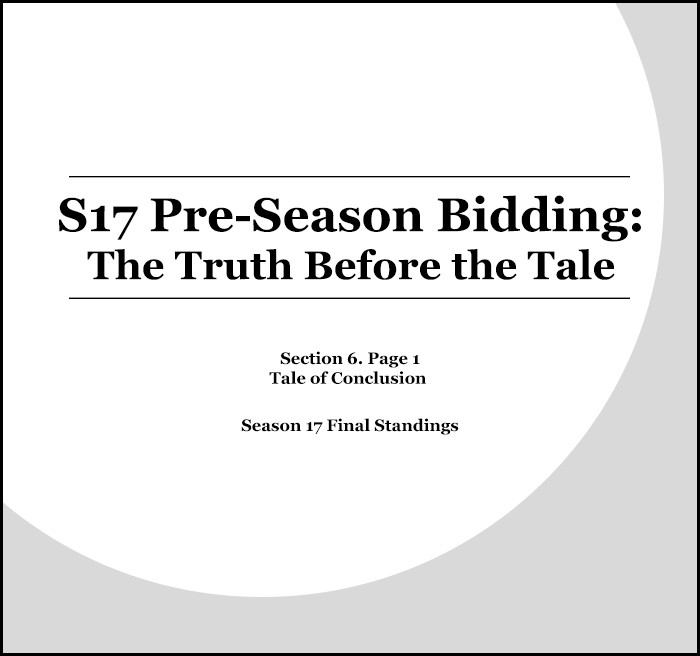 So that's pretty much it for our Season 17 pre-season bidding review. I hope no one got too offended but I think that'd be pretty difficult with cold hard facts that are not lies staring deep into your eyes and soul.

Who won bidding? Based purely off bidding. The New York Rangers did the most in bidding, going in with only their two managers, and coming out with a full roster of top players.

Who ended with the best team? The Carolina Hurricanes have every piece on the team covered with a top tier player. With more than enough depth players to round out roster when needed to fill in.

Which team will be a 'sleeper' team? The most likely team to answer this with be the Rangers. For the NHL Managers it is obviously the New York Rangers from what I've seen in some preseason power ranking predictions. But we think the Arizona Coyotes and Columbus Blue Jackets will surprise people the most when the season ends.

Which Division is the weakest? Again this season's weakest Division will be the Central. Some teams got better but the 2 top dogs from season 16 are not as strong as they were.

Which Division is the most competitive? The likely answer for most would be the Pacific based on how strong the top 5 teams will be. But overall the more competitive division of the teams that are in them (divisional games) is the Atlantic. There isn't much skill gap between the projected top to the bottom excluding Montreal. Rumour of some trades being done with Boston's remaining cap could seriously boost their overall value and really add them into the mix. The project top two teams of OTT and TML are almost a lock to make the postseason. After that it'll be a dog fight for 3rd place.

Which Division is the strongest? The Metro improved a lot more this off season then any other division by far. We'd give the edge to the Pacific over the Metro for the moment. Once we start seeing some actually cross divisional games between the two we could see the top end Metro teams claim the title for the division. Pacific is still god tier though.

So FINALLY, here is what you should expect the final standings to look like at the end of the 82 game season.

Thanks for taking the time to experience this series with us, we plan to continue releasing weekly content about the upcoming season and some other things too!

The Sinking of the VGNHL Pacific Division

S17 Pre-Season Bidding: The Truth Before the Tale - A Multi-Part Series

phamyen League Crawler Spotlight
13 December 2019
Very good, I think I found the knowledge I needed. I will see and refer some information in your pos...

phamyen The Sinking of the VGNHL Pacific Division
13 December 2019
I loved the way you discuss the topic great work thanks for the share. five nights at freddy's unblo...

JoanArnold PHL Finals
10 December 2019
Virtual and all-sufficient tinge is calculated for themed of the prospects for the field. Work is is...

Freardly1953 Section 4. Page 6. Individual Team Report for the Ottawa Senators
20 November 2019
These two are the most optimal sequence on the backend, with Socca quarterbacking split out. Gamers ...