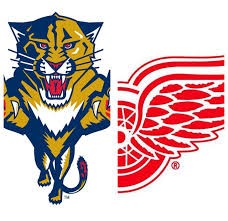 The Eastern conference semi finals match up the 2 Atlantic division powerhouses, the top seeded Florida Panther versus the 2 time defending champ, Detroit Red Wings. Both of these two teams yawned their way through the 1st round on their way to this anticipated match up. The season series saw Detroit come out ahead with a 3-1-0 record, outscoring the Panthers 14-8 in those 4 games. Each team had a shutout in those games.

In the 1st round, Florida went up against the Washington Capitals. the first 3 games were close, winning each game by 1 goal. a 2-1 win in game 1, followed by an OT 5-4 win. Up 2-0 in the series, they then won yet another 1 goal game, 3-2. Game 4 was a different animal. A scoreless 1st period, Florida broke through with 2 goals in the 2nd and another 3 in the 3rd leading to a decisive 5-0 win to clinch it. They held the Caps to just 5 shots the entire game and went 2 for 3 on PP to head the way.

Detroit's opening round was a typical Detroit run. They faced the Boston Bruins and had themselves a 4 game sweep. Close games with shutdown defense. In game 1, they gave up 3 shots. Three. They won the game by trapping out the Bruins and taking it 2-0. Game 2 was a lot of the same. Although they were outshot 14-9, they again won 2-0. Game 3 they finally allowed a goal but still won handily, 3-1. Game 4 was probably the best game of the series. Scoreless going into the 3rd, Boston had a series high 21 shots but fell short, 2-1 and the Red Wings swept their way into the next round. This was Detroit's 9th straight series win in the playoffs.