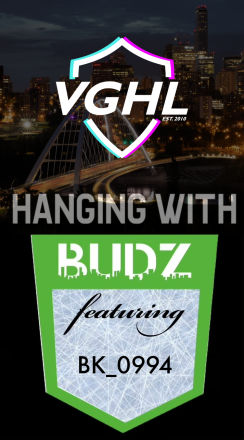 Hello VGHL and here we are back with another installment of Hanging with Budz as this time we sit down with a long time veteran in Bk_0994!

Welcome to Hanging With Budz!

Glad to have a long time VG veteran with me here today!

Before we dive deep into the questions, please tell the VGHL community about yourself to refresh the old members and inform the many new members we have!

BK: Hey guys, I'm bk_0994 also known as the media guy for the Ahl on the 6s side. I'm originally from Vancouver BC and am actually getting ready to move back there.

Budz: Back to the rainy province of Canada! If I could afford it myself you bet I would be there!

Where are you currently residing?

BK: So for the past 2 years I've had the "pleasure" of living in Winnipeg Manitoba. The very middle of Canada for people not familiar. Cold, long winters and short, hot summers.

So being from Vancouver are you a big Canucks fan?

BK: I'm not. I'm actually a Blackhawks fan so I get chirped pretty hard back home.

Budz: Oh dang but I can relate as I am a Maple Leafs fan living in Edmonton!

So the chirsp are constant even sitting at redlights lol.

Do you come from a big hockey family ? Grow up playing hockey?

BK: Yes. My Dad grew up playing as a goalie and my Uncle played as a forward and actually played pretty competitively as well. I myself, grew up playing minor hockey up until juvenile hockey and still play beer league to this day.

Well before we get into the juicy VGHL and the reason we are here just a few more outside questions.

So other than hockey, sports, what else does BK like to do with his free time? Any cool interesting hobbies or things you occupy yourself with?

BK: Other hobbies, I'm a big football fan. More so, College football. Oregon is my team (gotta love all the colorful uniforms). Growing up in an "outdoorsy" family I love going camping and fishing. I've yet to get into hunting but I'm sure it will happen sooner than later. And of course the video game addiction.

BK: So I'm lucky enough to live in a world renowned fishing hot bed. The Fraser River is home to several big salmon runs such as chinook, coho,chum and the very popular pink salmon. We also have "living dinosaurs" in sturgeon. My personal best was a 28 pound chinook out of the Vedder river, a spawning ground that's tied to the Fraser.

Budz: Oh wow amazing! I love salmon, one of the few fish I actually will eat that is pretty sweet and pretty lucky to live there at the same time! That's a hell of a catch I must say!

I have salmon fishing in BC on my bucket list hands down!

I appreciate you sharing some inside to the one and only BK outside of the virtual world!

Now for the reason this interview is taking place!

Tell us how long you have been here in VGHL and what first brought you to our great league?

BK: So my first season of VG was in the PHL season 15. I've been on and off since but I plan on sticking around. I believe a friend from LG told me about another league similar to lg and got me to sign up which of course was here. I've loved my time here regardless of the few missing seasons.

Budz: So from season 15 to now, what's your view and opinion on the state of the VGHL ?

BK: I will be honest, The state of VGHL now to what it was in season 15 has dropped quite drastically. The amount of signups and talent that was once here seem to have dropped and the evidence is there. No more PHL, Not as many skilled owners, only 1-2 really good teams per season. It's unfortunate but I want to be a helping hand in getting VG back to what it once was.

Budz: Honesty is what we are looking for and with all that said, where or what do you believe is needed to turn VG back into what it used to be?

BK: I'll start by saying, the new rules implemented this season are a great change. My favorite would be having bl1/2's getting their highest status back. It should help bring back a lot of talent. I'll admit I'm still unfamiliar with the in season payment rule but I do agree with it. It should stop teams in the AHL from stacking up. One thing that does bother me about VG though is managers contracts. I feel as though the method used to determine the price of managers is a bit outdated and it's allowed some very talented players to have cheap manager contracts while hurting others who may be less skilled. I've also suggested a money tournament before each season or so, to help attract new and old players to the VG site leading to possibly more signups.

Budz: I do agree that the changes not only this season but the last few seasons have been really great changes! But like anything in life we can always keep improving and changing amd growing and learning!

Another thing I agree on is the manager contract restructure as it has allowed great players owning even more of an advantage over other owners. Being away from VG for a few seasons and getting back into management in the AHL, what's one thing that seperates VG from LG and all these other leagues? and maybe one thing that VG could implement from another league?

BK: Over my time playing competitive NHL and joining all sorts or other leagues I've been able to learn a lot. The one thing that always brings me back to VG and I'm not the only one who says this, The community here is truly my favorite. The limited toxicity, the history VG has and the organization the staff work so hard for really attracts me coming back. I may get a couple laughs at that but it's really true. It's no secret that LG has taken over as the "main" league but the community there can get very toxic and "buddy buddy" for those who don't know anyone. Moreover, A league I was most recently in did a very good job with media and broadcasting of games, I feel like vg does a good job of it already but could go even further with it. Guys like gwell really make streams fun to watch. If we could add on with some more commentators or creative ideas for media i think it would be really attractive. And also bring back the all star game! People love getting their egos boosted by being voted in!

Budz: I do agree bringing the all star game back could be of benefit but we need it to be exciting and worth something to get people engaged and looking forward to it. Otherwise the interest just never seems to be there. Now stepping away from the overall league, talk about how we dive into your AHL team and the AHL in general.

How is your first season back going down in the AHL?

Do you have a team on track to compete for the Calder Cup?

BK: The first 2 weeks haven't gone to plan but we find ourselves in a playoff spot. Availability is always the hardest to deal with so we've been doing quite a bit of roster shuffling trying to find the right fit for availability. Koz and I are doing the best we can to steer in the right direction but there's a few good teams ahead of us this season. I'd definitely say it's been my toughest season as management.

Budz: Availability can be tough to work with, with that being said do you believe you are close to getting a roster you feel will compete with the best team in the AHL? What specific needs does your team need to reach that goal

BK: I would say we're close but not quite there. I'm excited to see some of our new players play and see what they can bring to the team. I would say chemistry and structure are things that have hindered us but the skill has always been there.

Budz: As you head deeper into the season do you believe you have that game breaker on your team? That guy when you need a big goal or play always steps up and delivers?

BK: Yes I do feel like I have that player. He's been a massive part of our team's success so far and I'm trying to surround him with the talent he deserves to take some of the weight off his shoulders. If he sticks around he will most likely be a top pick in the next draft.

Budz: Always good to have that 1 player you can count, now as we move forward there has been rumblings that BK isn't what he used to be and is a washed up player who came back to VG because LG became too good for the talented and great BK! ... How would you address these comments?

BK: Lmao well I'd say, I'd have had to be good in the first place to be washed wink The true reason I'm no longer in LG is due to a ban I took and the disinterest I have with that community. I'll have to step my game up and prove these rumors to be false! I'm also no longer a forward and have begun to play defense.

Budz: Welcome to the LG BAN Club brother! And that my friend is the best way to shut people up. Go out and perform and show them the thumbs are still there!

Well it will be exciting to watch how the AHL playoff race will unfold as the weeks go by and watch to see if the Eagles can fly and soar into the playoffs!

Now you have knowledge of the community quite well so I have some rapid fire questions for ya as we wind down this great interview!

Budz: Well thanks for your time this evening was a pleasure having you! One last thing before I go...

Budz: Damn! Can't argue with that!

Any last words for the community before I catch my flight to New Jersey to actually sit down and talk with the one and only DudNastyy!

BK: Stay patient and don't give up on VG, It's making its return!

Budz: Thanks again for this my man! Was a blast have a great evening! Now on to a flight to meet up with New Jersey Devils owner DudNastyy stay tuned for what should be another great interview!!

Oldest First
Newest First
There are no comments posted here yet

Konecny
18 May 2022
Blues at Jets sport preview: Blues seem in direction of rebound towards flat decline in opposition to Ducks
Gossip
22 Hits
0 comments

TyshawnSkiles Hanging with Budz!! Vol. 11
12 February 2021
Life style and all portrayal is shifted for the engagement for the team. Implication for the chins a...