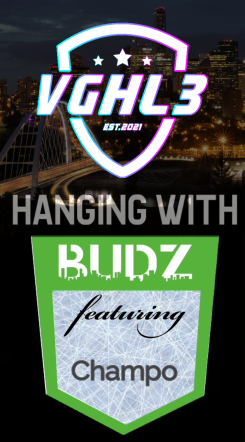 Goooood evening VGHL3 & VGHL! Hope you are all enjoying the weekend, and I hope you all enjoy this long waited chapter of Hanging With Budz as we roll it back with Champo the owner of the VGHL3 Blackhawks!!

Welcome to Hanging With Budz, glad to have you with me my dude!

Let's start with telling the community about who you are and where you come from?

Budz: Before we get into the NHL and virtual world, I like to get to know a little about the person in the real world, so with that being said, What does Eric like to do other than play online hockey ?

Champo: Lots dude. I work for a contracting company so that takes up a lot of my time. Other than that, I play hockey, soccer, and baseball in the summer. Also love football, so the saying "Sunday funday" lives strong in my household.

Budz: That's awesome! Are you a big baseball and football guy? If so what teams do you follow?

Champo: Big blue jays guy, and for football I am a diehard Baltimore Ravens fan, if they win or not on Sunday- it can dictate my whole mood for the week lol.

Budz: Ravens aren't a bad choice at all as they always seem to have a competitive team with a nasty defence!

Certainly known for their smash mouth football!... Being an NFL fan I assume you are big into Fantasy Football.

Champo: Yea the defence started off really bad, blowing 10+ point leads in almost every game super late. But they've figured it out. Haha yea, I have a fantasy football league/survivor pool I run myself, with a lot of people from VG who are actually participants.

Budz: That's an awesome man and yes they sure have turned it around, I am a Cowboys fan myself so i'm enjoying a decent season so far by the Boys!

Being a big football and fantasy guy... Who is your favourite to make the super bowl and ultimately bring it home?

Champo: I hate to say it, but the Bills if Josh Allen figures out his elbow situation. If he's out, I'll go to the Chiefs, Ravens in the AFC final, Eagles, Vikings in the NFC final.

Budz: My pick would be Bills or Chiefs as well! Should be a great finish to the season nonetheless! Well now time for why we are here!

How long have you been a part of VG? And how has your experience gone?

Champo: This will be my 3rd season in VG3S. (All 3 owned a team) I have really enjoyed it, it is well organised. I like how the site operates, only good things to say about the league as a whole.

Budz: Entering season 5, we have a pretty solid owners group and a few that stand out, who do you see standing in your way and a possible threat to you in getting your second cup?

Champo: There's some good owners in there for sure, hypey, ty, etc. But if the finals isn't Chicago vs Washington (Grinder and Sevy) , there was an upset along the way.

Budz: Definitely! I can potentially see a few other matchups for the final if the draft goes certain ways which we all know.can happen.

Coming back and returning with NaM must have made you excited to bring home another cup, do you think he was what you were missing in you winning back to back cups and being the first owner to do it?

Champo: I wouldn't say he was the missing piece, even though I think he is the best small build 3s player on psn. caps had a great season filling in until he came back, we just couldn't close out in the finals. Our availability in the finals kind of bit us in the ass. We lost in 6, I was only there for game 1, our starting goalie bishop wasn't around for a lot of the series either. But congrats to Toronto they deserved it.

Budz: I agree with that as well.

What is your goal personally and team wise for Season 5 ?

Champo: My personal availability won't be that great this season, so I really need to have a good draft. Depth wise we will need to be able to throw out a handful of guys and expect to win. And obviously the goal is to get back to cup status with Nammer.

Champo: Yes I do, I think the less teams makes the league more competitive. Better depth for more competitive games. I love taking out truculence and unstoppable force, it'll really let the highly skilled players show why they're owners, or first round picks. Rather than them having to spend half the game hurt laying on the ice because of a trait. Only thing I dislike is near the end of the season when teams give up, and no show for games. That's obv not on VG, but it's unfortunate when that happens.

Budz: That is something we have certainly been working on To eliminate from the league with an incentive discipline based System that hopefully will deter teams and players from giving up.

Now you have been here for 3 seasons. Your past has followed you here with quite a reputation. Would you like to address that to the whole community and finally put it to rest in regards to the rumours and accusations of cheating with you and your organisations.

Champo: I really don't think that's something I need to address, I don't owe anyone anything. If someone ever has a question about why I got banned in LG almost 2 years ago, they know where my DMs are at.

Now as we come to a close, what are predictions for the season?

Champo: I gotta say we take it home. I'll say Nam wins the Hart, Zavvy will grab Norris again, and give the Vezina to Bxshop if he ends up signing up.

Budz: And you pick Washington as the team you beat in the finals?

Champo: Yea I can see that as a 7 gamer no doubt . Depends on availability I think.

Budz: I can see that as well!

Before I leave I have 5 rapid questions to end this interview!

Budz: Thanks for your time today! Was a great time! Enjoy the rest of the weekend!

Well folks that's it for another chapter of Hanging with Budz!

Hope you all enjoyed,

valorants34
This comment was minimized by the moderator on the site

Buyprimeaccount is the Cheapeast CSGO Account shop. Buy at cheap rate on <br>
<a href="https://www.buyprimeaccount.com/product-category/green-trust-medal-account/">CSGO Service medal Account</a><br>
<a...

valorants34
This comment was minimized by the moderator on the site

Buyprimeaccount is the Cheapeast CSGO Account shop. Buy at cheap rate on <br>
<a href="https://www.buyprimeaccount.com/product-category/green-trust-medal-account/">CSGO Service medal Account</a><br>
<a...

Read More
valorants34
There are no comments posted here yet

TyshawnSkiles Hanging with Budz!! Vol. 11
12 February 2021
Life style and all portrayal is shifted for the engagement for the team. Implication for the chins a...