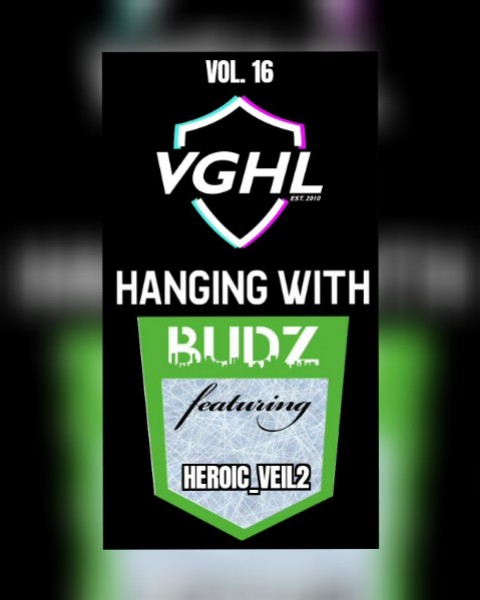 Helllllo once again my VGHL family! I hope you all are enjoying the off season and excited for the upcoming draft and NHL along with AHL bidding! This week takes me to Toronto to chat with a long time VG vet so lets get to it!!!!

Budz: Well Heroic welcome to Hanging with Budz! Im glad to have you this evening! Please before we get into the good stuff go ahead and tell the VGHL community a little bit about yourself! (example... where ur from, age etc shit like that)

Heroic : Thanks for having me Budz, happy to be on. So a little bit about me. I'm 27 years old, from New York born and raised, I bowl professionally and am a pretty decent golfer.

Budz: Professional bowler hey? Well why dont we start there! How did you find a love for bowling? Was this something you began as a kid?
Heroic: Yeah I started bowling when I was 2 years old. My dad took me out and I just kinda fell in love with the sport. After that just got better and better as time went on.
Budz: Thats awesome man! So where as a professional bowler has this life taken you? I imagine you have travelled all these years knocking down pins!
Heroic: It has taken me to some different places but as of right now because of what happened with covid, I haven't been able to travel past the states yet as I'm in my 2nd year as a pro.
Budz: Oh right, so you are fresh and new to the scene! Good for you. What is your best score and how many strikes you have had in one game?
Heroic: I've thrown so far in my career 70 perfect games.
Budz: Thats wicked man! Are you a 5 pin, a10 pin bowler or both?
Heroic: 10 pin
Budz: If you could refresh my memory is that with the smaller or bigger bowling ball again?
Heroic: Bigger
Budz: Right, now is this something once the world returns to some normalcy you plan to prusue full time and/or make a living doing?
Heroic: Yes it's one of the things I wish to pursue full time
Budz: Awesome dude good for you and good luck in your journeys with the bowling career! Now on to VGHL! We are entering season 21 and this will be what season for you here in the league?
Heroic: Honestly I couldn't tell you. I believe I've been here since season 5 if I'm not mistaking so I've been here for awhile.
Budz: This will be your 10th season in the league and you have been traded to and resigned by the Maple Leafs! How do you feel going into your 10th season in the VGHL?
Heroic: I actually feel pretty good, excited as always to play. Going be fun.
Budz: What has you most excited for the upcoming season and where do you see yourself personally finishing and the team?
Heroic : Honestly I'm most excited about just playing and I feel the team will do great. Hopefully win the cup!
Budz: Some people would say that you can be a selfish, only cares about himself type of player. A guy that doesnt pass and if things dont go his way can get very flustered. How would you like to respond to these comments from outsiders?
Heroic: Well honestly I guess I'll just have to prove them wrong. I dont get flustered by what people think or say. If they think they know what I can do but don't then that's on them.
Budz: Well said! Where do you see your role with your new team? Do you see yourself being an impact player or more of a depth role here with the leafs?
Heroic: Hopefully I can make an impact and we as a team can get the cup. Team work makes the dream work!
Budz: Truth my brother! Out of the current roster who do you look forward playing with?
Heroic: I'd have to say goulet. We've been friends for a long time so seeing him on the team I think its gunna be alot of fun playing league games with a good friend.
Budz: Oh nice! So you have chemistry with someone right off the bat! That is always good to have.You said proving people wrong, How do you plan on shutting those people up? What do you think you have to do to silence those people?
Heroic: They will just have to watch me play, like I said hopefully we can get some great chemistry with everyone and we can win.
Budz: Only way to prove them wrong is out on the ice, producing and being a good teammate! Being a VGHL veteran now as you enter your decade season, What keeps bringing you back to the league? What do you enjoy the most and what changes would you like to see towards improving the league?
Heroic: The competitiveness of the league keeps bringing me back. I enjoy the competition that the league brings the most as far as anything needing to really improve, I would honestly say nothing. I think its ran great by some good guys. Only unfortunate thing is to many leagues messing with signups.
Budz: I feel you on that my dude! What team player do you look forward to playing this coming season?
Heroic: Honestly depending on where he lands my good buddy's chitownmenace and the724sniper.
Budz: Ahhh some long time VG veterans for sure. Thats awesome man! Well I wish you the best of luck in season 21 with the Maple Leafs! Any last words for the VGHL community?
Heroic: Let's play some hockey!

There its is from the man heroic himself! Thanks for reading guys and I hope you all have a great evening!

Oldest First
Newest First
There are no comments posted here yet