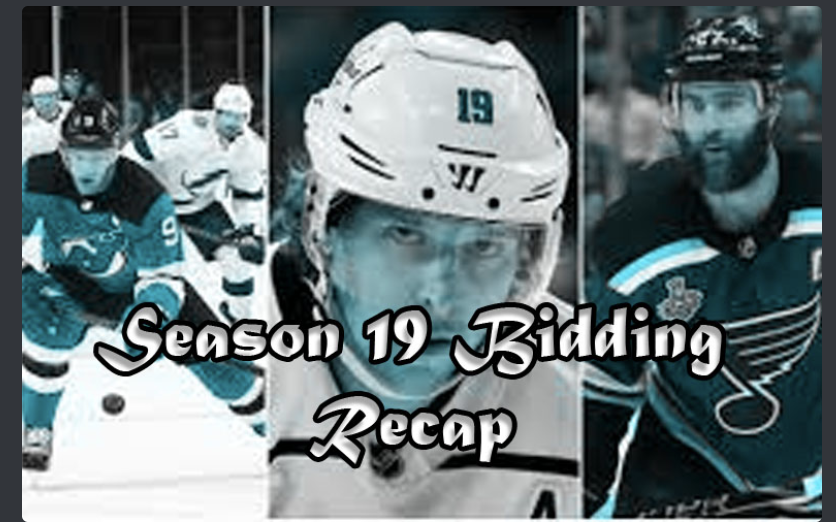 To finish up bidding I have decided to ask various NHL owners a series of questions about bidding and how they think they did.. I was intrigued by what answers we would receive. ​I am excited to see how this overall season goes and who ends up on top. Without further ado I am pleased to release the S19 bidding interviews.

First up is Ducks Captain, NielerR:

I felt that our bidding went very smoothly, we got the core players who we had planned to get & for some great prices compared to some of the other prices.

2) Did you get the players that you wanted?

Yes, I believe we did. We believe we have a group of players who love to quack. We wanted Ebony and Postandin. They were our main targets prior to bidding and those were our highest contract players.

Alexander1032, I believe he went for 11 M... I'm not really familiar with this player but that is a very big bid to receive, I hope he can live up to it!

We had a plan, we executed our plan. We feel like we are in a very comfortable position to contend in this league. Quack.

I'm sure every team had their own plans to build a successful team in this league. With that being said, I'm not sold on Philadelphia's bidding. Alexander1032 and rharmer3 went for a combined 19 M and that means they have a lot of carrying to do. I wish them and the rest of the flyers best of luck tho!

6) Is there any one position that you think you're lacking in talent, and where is your strong suit?

I wouldn't say lacking, there are places that we can improve but we are happy with the players we got throughout the process. Where we are the strongest is probably the right of the ice... until Rivnasty quacks under pressure and the team goes to shambles.

Next up we interviewed Predators Captain bk_0994:

I think our bidding went ok. Got some depth but missed out on some bigger names.

2) Did you get the players that you wanted to pick up?

We didn't get our originally targeted guys but we landed spiral_qc who has very impressive stats.

Deadly and I early on decided we wanted rharmer at Ld and frantic at rw but with the way bidding went we were not able to afford either of them.

I think there were a couple guys that I thought went too high, no discredit to them. I think Alexander1032 at 11m, sabres14 at 7.5m and ffrantic_ at 10m are both overpaid. Also, Spencerknight (a.k.a. Fleury-_l31l a.k.a westside_hockey9) at Goalie for 5m is a lot. Great players but that's too high for anyone with the salary cap being 32.5m. A couple guys who i think went too low were postandin74 (chyz) at 6m, nehxc at 5m, karlssonisgod at 4.5m and evening hypey at 8m. I think all of those names are franchise players and are now on very affordable deals. Even hypey at 8m due to his avail and skill.

There were a lot of great signings. It's hard to single out one team. I think Anaheim landing chyz and ebony for 6m each is probably the best. Montreal was very active in bidding and regardless of the spencerknight contract I think they did very well.

6) Is there any one position that you think you're lacking in talent, and where is your strong suit?

A team that I thought would do much better in bidding was Arizona. After a great roster last season they seemed to not spend big in bidding. I think they'll be making some moves and continue to be a force in the west however. I'd also say the rangers missed out on some bids. They have the cap to land some big contracts throughout the season however.

The third interview was with New Jersey Captain, isles2791:

Overall, we were happy with how bidding went. Brandon and I had a plan and got it done. The market was inflated, for sure, but we still managed to build upon last season's roster in an effort to make a deep playoff run and be a contender.

2) Did you get the players that you wanted?

Our top priority was a RW, and FFrantic_ fits the bill. I've heard only good things about him and his skill, and RW was a position we struggled finding a fit for last year. I'm excited to add a guy with his talent to the team and to add real firepower upfront. We also snagged PhillyFan1106 for 3.5mil, which was great value. PhillyFan has years of chemistry with our Dizruption, so we're excited to build upon a strength from last year.

I was surprised at how many double digit forwards there were. It really muddied the water for a bit on what options we had. Thankfully it all worked out as planned. On our team, to pump our own tires a bit, Lach12 at 2mil I felt was a great deal for us, as he was our starting goalie last year (at 5mil) and stole multiple games for us. Adding Hawks1Goal who is a dynamic G/LD to backup Lach and play defense for us is a great 500k bid. Great locker room guy also, has the jokes! Dizruption at 1mil was our re-sign, so it doesn't count, but at 1m is fantastic. I'll also throw Phillyfan1106 at 3.5mil as a guy we got undervalued.

Hard to say. Time will tell, as teams drafted a few second tags and unknown guys to rest of the league.

Also hard to say this early, as we haven't seen the teams hit the ice yet. I'll throw in teams I think could have managed their cap better. Philly spent 20mil on two players (Alexander1032, RW and rharmer3, D). I don't think their roster is complete enough to target only 2 players in bidding with that much of their cap, but I'm ready to be proven wrong on that. The other is Columbus, who spent 13m on two defensemen, and I think overpaid for both.

6) Is there any one pos that you think you're lacking in talent, and where is your strong suit?

If you asked me this last season, I would tell you RW and defensive depth. That's why I'm excited for this season. We went out and addressed both of those needs. If this team has a weakness, it will show itself on the ice, and we will work towards fixing it if that happens. We're hoping to build upon a playoff season last year and have further success in Brandon and I's first full season as management together. It's going to be a dogfight in the Metro. Let's go boys.