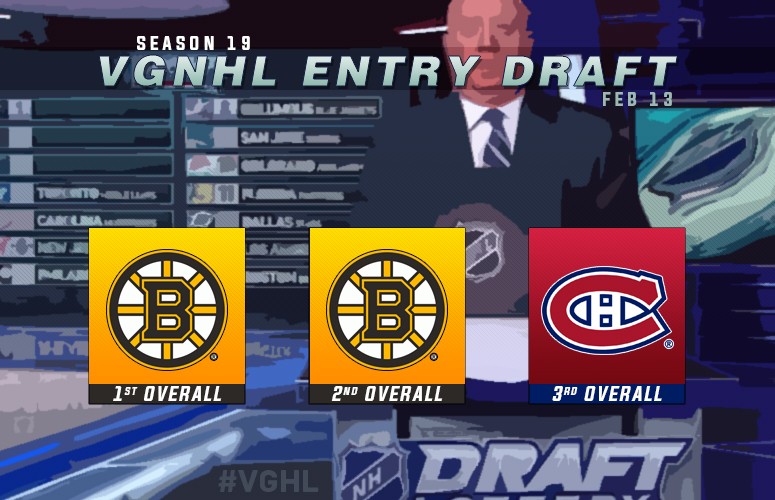 The S19 VGNHL draft surprisingly went off without any real issues. A couple owners took a minute or two longer than they probably should have. Some people were seemingly upset by the blockbuster trade that we seen kick the draft off(that also resulted in a played not listed on the draft board being taken #1 overall by Nashville), but other than a few small bumps things were pretty smooth and we wrapped things up in just over 2 hours. Today I'll recap the trades, cover each of the top five picks and break down the winners and losers of the draft from my own perspective. (Also as a side note, we will be counting the fifth pick as the forth pick due to Detroit forfeiting their draft rights to reset their roster entirely.)
There were a few trades this year in the draft, seeing a lot of players and picks moving around. I imagine a lot of these trades were in the works prior to the trade office closing, at least I'm sure some of them were. We'll start off by talking about the biggest, and most polarizing trade of the draft which also happened to be the first.

Before the trade was even official people started reacting in discord and the official VG draft stream how the trade was highway robbery. How Nashville certainly had something up their sleeve. They were not wrong, Nashville had big plans for the first overall pick, and judging by the reactions to it, it was something nobody else even considered a possibility.

"With the first overall pick the Nashville Predators select - Kanyes-Ego-"

A player well known by another name, Peeace. He was not listed on the draft board however and right away a select few managers started calling for infractions to be levied against someone, anyone. This didn't happen, let's just move on.

"With the second overall pick the Nashville Predators select- zzzRy0"

I do not believe anyone complained about this pick in particular and was to be expected, I think. However some managers continued on their soapbox how Hawkeye essentially gave away two much better players in exchange for worse players, and the trade made no sense, even with him being in the dark about Peeace's availability. Hawkeye defended his decision by stating he did not know many players in the draft and needed to secure some veteran talent he was confident in.

"With the third overall pick the Boston Bruins select- ROLLaBACKWOODS"

Not a lot to say about this pick, ROLLa was who Hawkeye really wanted, and he got him using the third pick instead of locking him in at #1, which saves him 1m on the contract.

"With the Forth (5th) overall pick the Carolina Hurricanes select- j_Sherminator"

I think Sherminator was expected to go inside the first five picks with the season he had in the AHL last season posting 77 points in only 19 games, that's over 4ppg for those of you who can't math. And so go in the top five he did. Not sure if him and Scalz have any history but I'm sure it will work out well for both the team and the player drafted here.

Not sure how to approach discussing this pick- from my limited perspective is seems like a heavy reach. Sure did he go 15-0-1 in the AHL last season? Yes he did. But 13 of those 16 games were on a team I believe to have been caught cheating, so take that with a grain of salt. However he also does have an overall 50-11-6 in all VG games recorded on his profile. All that being said I think Buffalo would of been able to trade back and still get their man on a slightly cheaper contract. But sometimes it's better to be safe than sorry and if that was Buffalo's thought process I can respect it.

Now let's briefly discuss the other two trades that took place in the first round before we wrap things up here.

Edmonton made this trade and ended up selecting Mrmagoo with the pick. A few people stated this pick was a reach. I am no friend of Budz, and I think he's an idiot to be honest, but I would hesitate to call Mrmagoo a reach at 9th overall. For context, J_Sherminator, the 3rd overall pick discussed earlier in the post posted an incredible 77pts in only 19 games for an average of exactly 4.08PPG. MrMagoo put up a nearly equally as impressive 128 pts in only 33 games for a PPG average of 3.88. Which is only a 0.20ppg drop from the #3 overall picks point production, and with nearly double the sample size to go off. All that said, I think this was a good trade and smart move for once in Budz life, honestly, I suspect Broskii had something to do with this one.

I honestly don't remember anyone commenting in discord or the stream about this trade, maybe they did and I blocked it out (lol.) Overall I think this trade benefit both teams and I am happy with the results of the picks I obtained VIA this trade in DerpyDaymare who is a successful goalie in multiple leagues and IamMattyIce who has proven to be a valuable asset to me in many seasons before and looks forward to proving himself at the VGNHL level, and I look forward to giving him a chance to do just that.

To end the article I think we should list a couple winners, and a couple losers. To be honest, I don't feel like too many teams 'Lost' per say so let's stick to two winners and two losers.

Winners:
1- Nashville. Nashville obviously came out on top of the draft, anyone who says otherwise is stupid.
2- Ottawa & Edmonton. I'm biased as fuck so I put myself in here, deal with it. I like the moves I made, I like the picks I made. Also, Budz is a dickhead but his team made some decent moves and are now in a better position than they were pre-draft.

Losers:
1- Boston- I think if we're being completely objective than based solely on the fact Nashville came out so far ahead in the trade with Boston, regardless of if that was only because Boston, as well as other teams were unaware of Peeace's availability which understandably diluted the trade market for the first two picks is irrelevant. Boston lost this trade and the draft as a result.
2- Buffalo-This might surprise some people but I'm actually going to declare Buffalo the second biggest losers of the draft. As far as I'm concerned, both of their picks were heavy reaches that could of been traded down for, and thus they are heavily over paying for those draft contracts, in my opinion.

If you read this far, I feel bad for you. But thanks.

Something exciting is coming