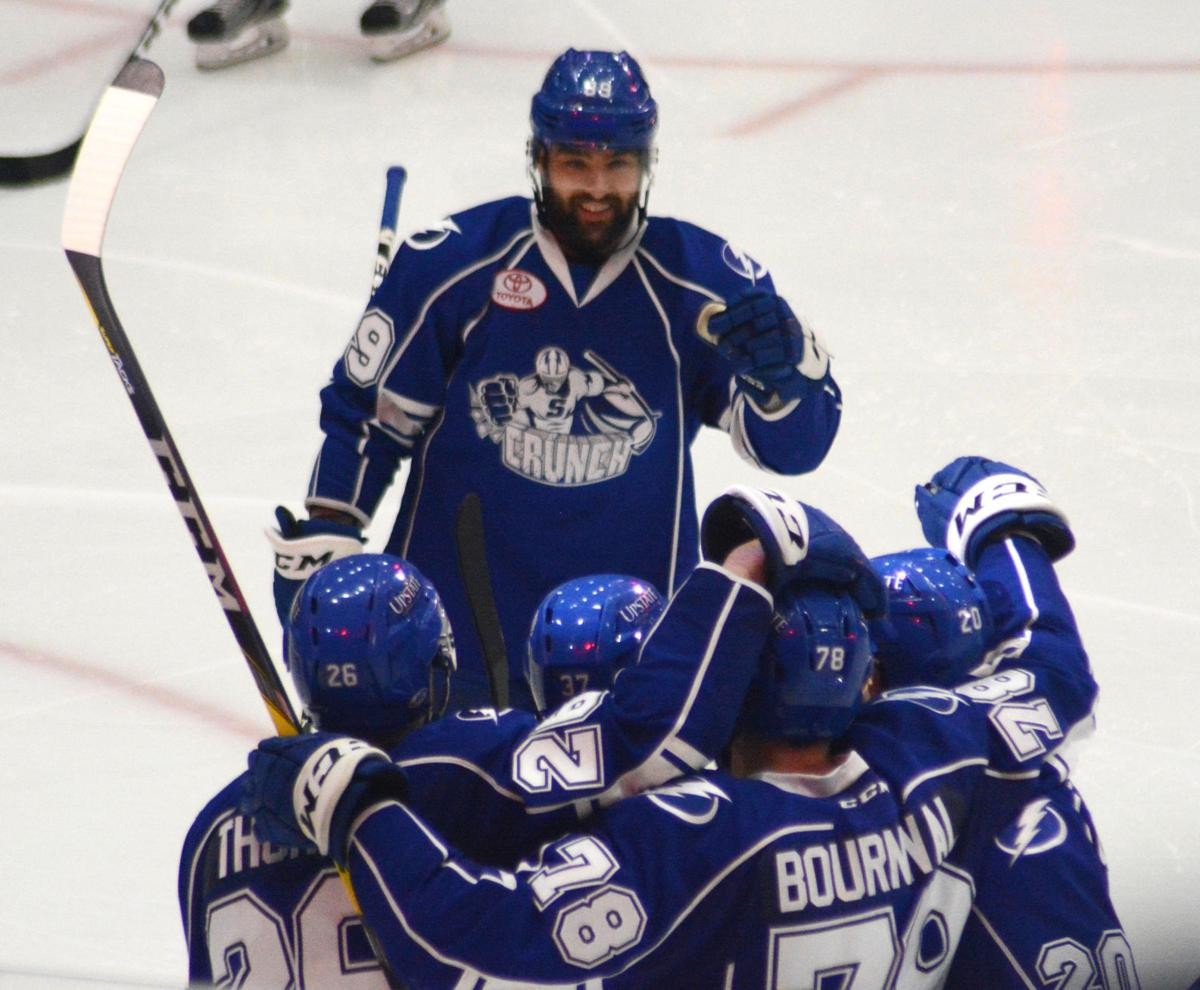 Four months ago, we all embarked on a journey to the Calder Cup.  On Wednesday, August 1st one team reached the final destination.  A team surprisingly an underdog throughout the playoffs, yet was 1st overall pretty much the entire season.  Rarely in online hockey does a team stay intact an entire season.  The group of guys assembled by eXecuti0n80 and DrWally did just that, with only minimal moves made all season.  This proved valuable, especially in the playoffs when the pressure was on.  They knew from experience and playing together all season what they were capable of achieving.

It's funny how your strategy changes as the season goes on.  How the guys you thought were your top line at the beginning are not together at the end.  Syracuse had their fair share of bumps in the road, dropping four out of five in the middle of the season that nearly knocked them out of 1st overall.  All of the trials and tribulations of the Season 15 regular season helped shape the team some of you met in the playoffs. 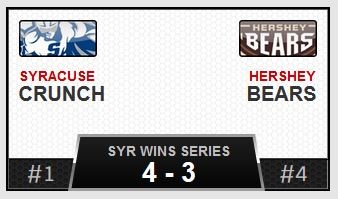 Syracuse had a difficult first round matchup with Hershey.  One factor was Hershey's familiarity with the Syracuse players.  Some players on each side were previously teammates in other leagues or seasons.  Hershey had a defensive strategy aimed at shutting down Syracuse.  They played discipline hockey, not chasing the puck and thrived on the counter attack.  Now many people have said Tread and Hershey collapsed.  To the contrary, Syracuse adapted, changed their play style to counter what Hershey was doing. Each game was close, starting off with two overtime thrillers.  Syracuse got on the back of their starting goaltender DirtyBird2012 who carried them with three shutouts in the last five games, including a 3-0 shutout in game seven.​
That first round series got teams talking.  Focusing on Syracuse being vulnerable, that cracks had formed in the foundation.  From the outside it would appear that way, but in the locker room you saw a group who had confidence.  Who knew they would win this series even being down 2-0 to start.  Even when their backs were against the wall, they knew that they could pull it off.​ 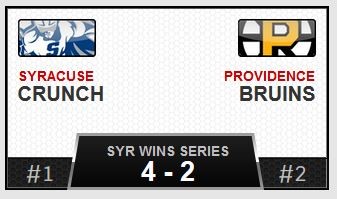 In round two, the Crunch went up against a tough Providence team.  Another team that was familiar with Syracuse, being in the same conference having played multiple games against the Crunch.  This time it was the Crunch who jumped out to a 2-0 lead. Finally finding their offense, the Crunch put up 18 goals against Providence.  Curlew77 would rally his team in game three blowing out the Crunch 7-1.  However, they could not find that magic again the rest of the series.  Syracuse closed them out in 6 games.  Confidence continued to rise as the Crunch started to find their groove on and off the ice.  Lessons were learned from this series that would impact the rest of the playoffs. 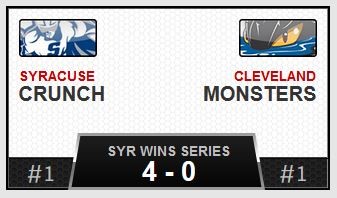 Round three, it all came together.  The lines worked exactly as planned.Defensively DrWally, eXecuti0n80 and Mikel98809 combined with the goal-tending of DirtyBird2012 and XUltimatomX frustrated the Monsters.  Only allowing 2 goals in four games.  Offensively, the lines clicked, moving GhostDanceDeluxe back to left wing and the top line of Mtl-Cor, RickRage and Alexander1032 scored 18 goals again in the third round.  This was a statement series for the Crunch, a way to show the league that they were on fire and a force to be reckon with.  Yet, the opposite occurred which is to be expected when you are on top everyone is trying to knock you down a level. 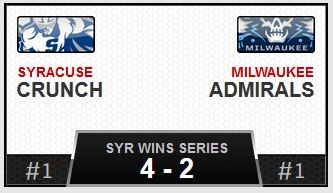 The Calder cup final was a battle between two great teams.Milwaukee and the streak vs Syracuse the top seed.  Sunday night saw a split, Syracuse winning game 1 and Milwaukee taking a tight game 2.  Monday night was a different story, Syracuse putting up 10 goals in two games compared with Milwaukee's 3.  The Crunch new Wednesday would be a different story that Milwaukee would throw everything they had at the Crunch and would not go out easy.  After the first game, some of the air was taken out of Syracuse's sails.  A closer game than 4-2 would dictate with the Crunch putting up 31 shots, it was Proxolol's time to shine and steal a game. Suddenly, Syracuse were down early in Game 6.Behind by 2 goals, the captain eXecuti0n80 put his team on his back.  Jumping up in the play midway through the second period, he score a one timer from the slot to bring his team with in one.  Then in the closing seconds of the second period, eXecuti0n80 struck again burying another one-timer past Proxolol to tie the game up.  To open the third, eXecuti0n80 took a bad tripping penalty.  As they have all year, the Crunch showed they were a third period team.  Shorthanded, the Crunch bailed out their captain by not only killing the penalty but scoring the game winning goal in the process.

The goal set by their ownership on day one was achieved on this night.  Elation erupted on the microphones, beers were drank, scotch was poured, and celebrations began.  Bittersweet, after all the naysayers, all the bulletin board material, it felt like confirmation was finally had, that Syracuse was the best.

Attached to this article is the Season 15 Syracuse Crunch Championship video.  Put together by the team's playoff MVP DirtyBird2012.  The song playing throughout the videos was also played before each playoff game. 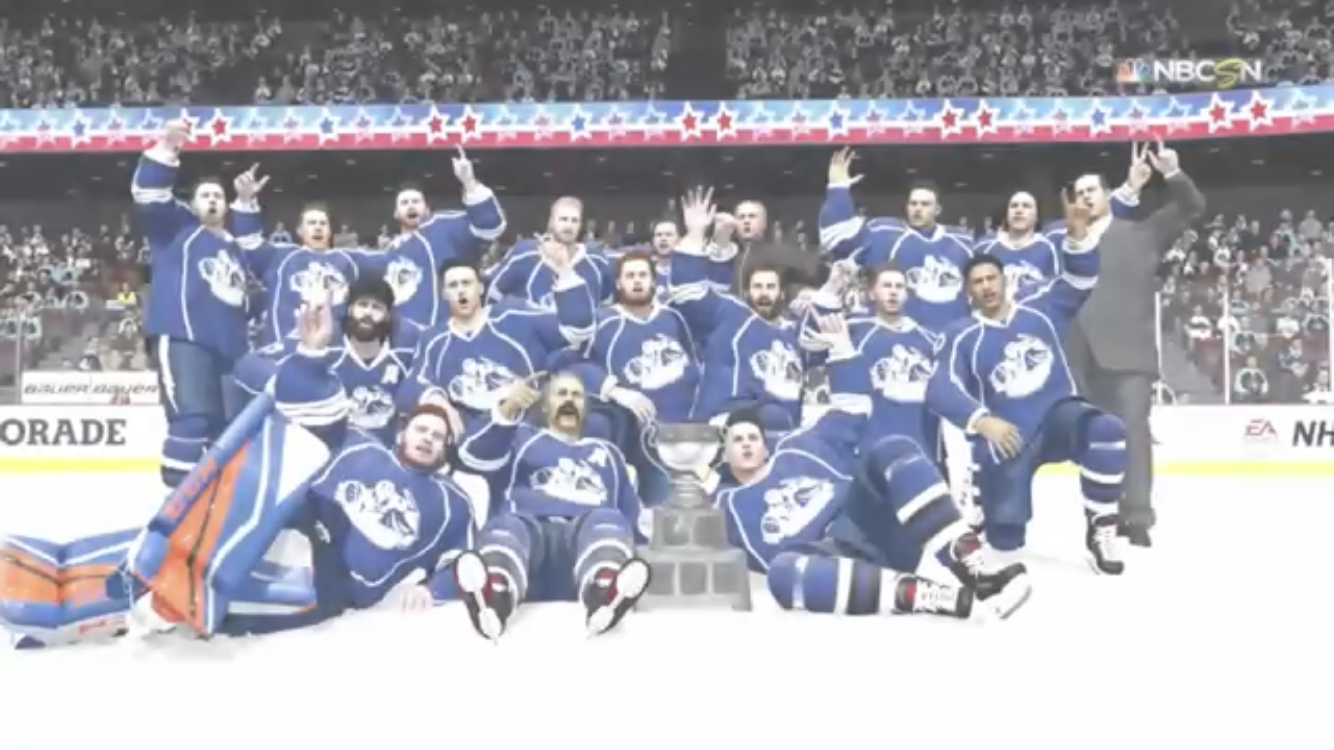 What an honor and privilege to have been part of this team. Nothing but love for you guys!

0 Cancel Reply
What an honor and privilege to have been part of this team. Nothing but love for you guys!
Cancel Update Comment