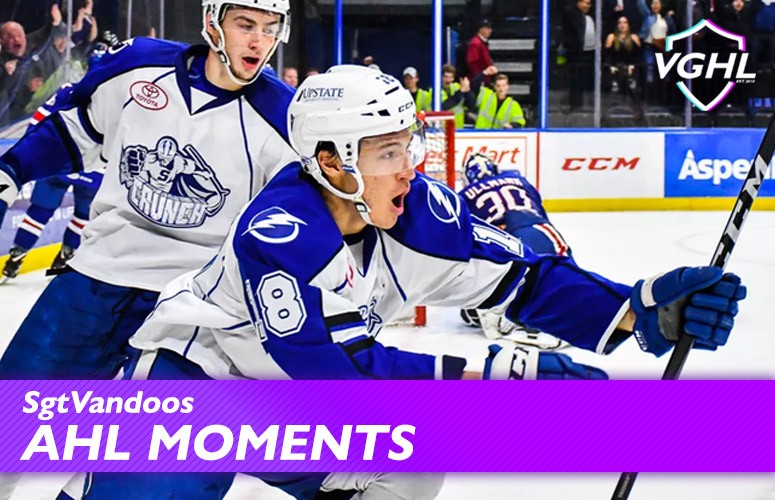 ​ The first week in the AHL has been like night and day, The Western Conference being on the Darker side of the 2. The east side the week ending with only three teams below 500 compare that to the Westside which saw nine teams below 500, and I'm sure that it has a lot to do with the fact that out of 142 games played 132 were inter-conference, Which the east hugely dominated with a 84 W/48 L record. Both conferences played 142 games in which the east scored a total of 650 goals to the 535 goals for the west. At that pace the east should see a tight standing between first and last playoff spot, as for the west, the tightest battle seems like it might take place from the bottom for the last playoff spot.

So in the East, Springfield lead the league with 18 pts, which was achieve with what appears to be to a great defensive play only allowing 17 goals against, which is top in the league. Syracuse is a very close second (with 1 game in hand) with 16 pts, contrary to Springfield offense was their weapon of choice with 54 goals for, 3rd overall. If they can lower their goals against for next week, keeping the same offensive numbers, Springfield could be in for a hard battle for top spot for next week. The one team that might change the whole battle for top spot in the east could be the second last team of the conference, the Grand Rapids Griffins, who was able to post the league "top goals for " with 61, keep in mind that they have yet been able to get either of their goaltenders (Bryzgalov80/SoSyck) to play this week. In the west, it looks like Utica (16 pts) and San Diego (14 pts) will battle it up for now. But I would be surprised to the Gulls run away with the conference top spot in a near future as they lead their conference in "goals for" by 32 compare to the Comets. Also wouldn't count the San Antonio Rampage (13 pts) with 44 "goals for" for that top spot in the west.

VGHL hub has a website that Has blog post that includes moment reviews. It has all the matches details from basketball. And they provide lab report writing service uk to write educational task easily, You can get streaming live with score board on it. Join their website for more information and subscribe to their channel for more blogs.

0 Cancel Reply
VGHL hub has a website that Has blog post that includes moment reviews. It has all the matches details from basketball. And they provide [url=https://www.ukbestessay.net/lab-report]lab report writing service uk[/url] to write educational task easily, You can get streaming live with score board on it. Join their website for more information and subscribe to their channel for more blogs.
Cancel Update Comment