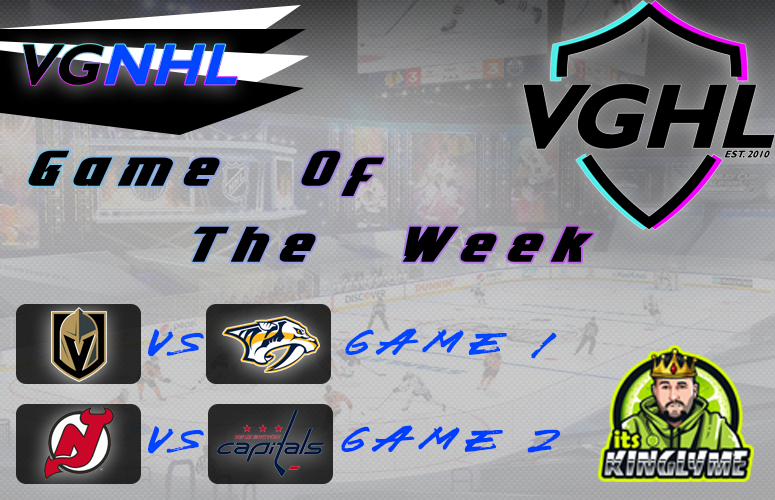 Helllllo VGHLers! We are back tonight for the first installment for VGNHL & VGAHL Games of the Week! To kick things off for season 21 we have a special memorial broadcast dedicated to the late Vibez who was a huge part of the NHL community for many years before his sudden and tragic passing! Out of respect we will hold a moment of silence to honour this great community member who left a lasting impression on many throughout the community as a player , friend , owner and just being a great person overall! So please join us tonight in taking a moment to remember a great person and friend of the community!

The first game of the night takes us down to Vegas where the Knights host the pre season president trophy favourites the Nashville Predators and with the Knights coming out of the gate at 2-0 this will be an early test for them to see where they actually stack up against one of the teams picked to win it all this season. The Preds come into this game looking to make a statement and show the league why they were picked to win it all both in the regular season and playoffs!

I reached out to both teams' management and here is what they had to say….

"With all the hype around Nashville and some of the trades they made, and the threat that San Jose brings, getting to start the season against these two great teams gives us a chance to put what we feel is a strong contender line up to the test early.  So  after an early win against San Jose, this game is  a game we want to win and prove that we will be in the mix for the top team in the West."

“Looking to make a statement game against Vegas tonight after we had some poor availability on Monday. We still have a lot to prove and won’t be taking any team lightly”

Our next game takes us to New Jersey where the Devils at 2-0 look to take on the 2-0 Capitals in what should be an intriguing matchup as both these teams will be fighting all season long for top spot in the metro! An early test for both teams to see how they matchup and see where their season will take them. I got words from both sides in this game and here are their thoughts on tonight's game…

J Sherm had this to say :

“I’m excited for this game. It should be a good matchup of 2 teams I expect to be battling for a spot at the top of the metro. We just want to build on our success from Monday, play defensively well, and get shots.”

His counterpart was a man of few words as he had nothing to say for this matchup and remained silent!

So tune into tonight to watch some early big season matchups! Plus the very special memorial tribute to the one and only vibes!!!!!