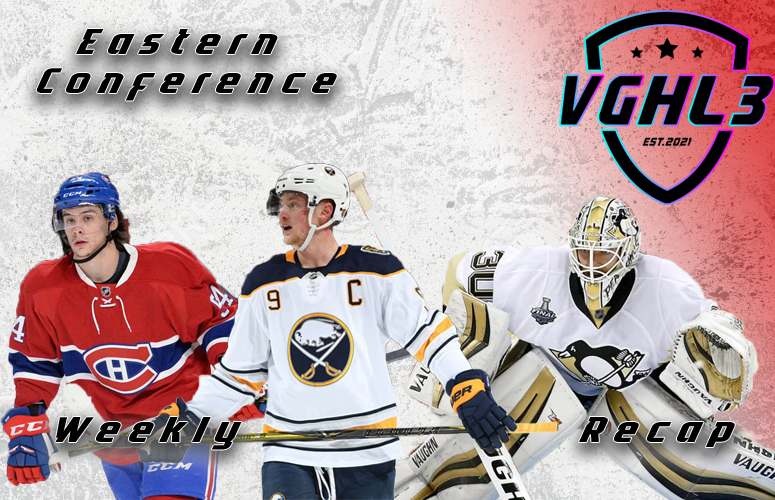 No vacations allowed for me eh? Y'all are lucky I like writing about how good you possess the puck and all that weird analytic shit I love. WEEK ONE IS OVER. Some obvious favourites and some obvious not-so favourites *chokes in Red Wing*. Before I get into week 1, I like to make it known I only cover the teams that sit in a playoff spot. It’s something I started doing when writing my weekly recaps for the NHL, I just felt bad telling the bottom feeders how bad they were on a weekly basis. I know I wasn’t about to write about how Detroit is a city of sadness and I will never look at a Wings jersey the same ever again. Oh, well I guess I did find the time to mention that.

The Canadiens completed a perfect first week, after a strong performance from their captain xTinkyy-. The Canadiens success stems from their strong ability to control the game, leading the league with a ridiculous A/TOA of 12:19. 3s and 6s are similar in the way that possession can mightily affect the outcome of the game. When a team averages over 12 minutes of TOA, and has a 4th ranked faceoff percentage of 54.8%, it’s going to give opposition headaches. If you’re lucky enough to win the draw and gain some precious possession against the Habs, their defense will limit your chances. They allowed the 2nd fewest goals this week, surrendering only 25 through their 9 games. In a 3v3 format, skill triumphs more frequently. This team showed no weaknesses in week 1, and will have a target on their back the remainder of the season. They will be the team all owners use as a measuring stick.

Buffalo suffered their only losses of the week to the East leading Canadiens and offensive powerhouse Bruins on night 1, giving them the drive to then go on a tear to close out the week 6-0-0. Owner Webber1786 carried the load offensively, scoring 24 of his teams 6th ranked 47 goals. Unlike Montreal, Buffalo showed a difficulty to control the flow of their games. Ending the week with an A/TOA of 6:47 (12th in league), the Sabres will need to find a way to keep their opponents on their heels for a larger duration of the game. Despite having the 3rd ranked defense, who only allowed 30 goals over their 9 games; supporting that with dominant possession would make them a bonafide wagon. Look for the Sabres to continue their stingy defense, while slowing their offense down to maintain possession and generate higher-danger chances.

Boston established themselves as an offensive dynamo in week 1, and finished their 9 games 3rd in the east. Much like the Canadiens, the Bruins are a strong possession team that can cycle you into the ice. There is nothing more frustrating than having a team throw it around your zone like the globetrotters, and with the skill the Bruins have it only takes one defensive mistake to be pulling the puck from your net. Led offensively by my forever duo xBeanZy-, the Bruins have depth at forward; boasting names like Smokeshowjoe, GonzoArmstrong, and Mikehthegod. All of which are capable of taking a game over with their scoring touch. This is a scary team to matchup with when they have so much open ice to take advantage of. Like I said before, in 3s.. Skill triumphs. This squad is full of skill, and will be a force next week and for the remainder of the season.

The final team in a playoff spot in the East is Pittsburgh, as the Penguins rode modest possession and frequent shot attempts to a 5-3-1 week 1. Life is good when you're the only team in your division to not go 2-7-0. One week down, and the Pens already have a 7 point lead on everybody else in the division, and needing relatively average production over the next 4 weeks to secure the Metro. Led by offensive dman Tymase_9, Pittsburgh put together a respectable week scoring 57 goals (5th in league). Pittsburgh threw the 4th most shots on goal in week 1, racking up 16.67/game. The Pens are quick starters, sitting 3rd for 1st period goals (18), and 4th for 2nd period goals (22). Playing a full 60 will be their mantra going into week 2, as they sit 9th in 3rd period goals with 17.

The number one team in the West is the definition of offense. Anaheim scored 82 goals (14 more than the #2 ranked Canadiens), while surrendering just 24 (also #1 in the league). I’ll start from the blueline out here; Capitalsfan_08 on D. Continuing to show it doesn’t matter what position he lines up at, he’ll haunt you. Caps has been one of the best 2way centres in VG over the last few seasons, and decided to show all of us forwards he can score more than us from the fu**ing blueline. Then you get to the centre, KrazyKoala, who's just popping off. Some inside info from the LeaGue that shall not be named is that he’s kinda nice on the sticks. Then there’s Yung96 who’s point per game sits at a modest…. Hahahahahahahahahahahahahahahahahaha. 10.40? Holy mother of god. 3s is a different game man, and these guys have it down to a science. Give them an inch and it’s in your net. Top 5 in possession, #1 for goals, #1 for goals against, #3 for faceoffs, #2 for shots. They’re legit scary. Why are you so good, bruh?

The Oilers used strong puck possession to find themselves 2nd in the West after week 1. Led by my favourite rage-fueled monster, Stamkos, Edmonton is going to give Anaheim a run for the Pacific all season long. They’re top 5 in almost every important stat: GF, GA, A/TOA, S/G. The only area Edmonton could improve is in the faceoff circle, where they sit 10th at 49.2%. Sneaky 8th round pick LilChapy is gross, 13 goals and 21 cookies in 3 games? Lord. This team has the skill to win this whole thing, and I’m very impressed with how Skillz and Jonsy drafted this squad. Not to mention Servz, a G posting an .800 in 3s is just ridiculous. Look for them to be even better next week, and separate themselves from the rest of the pack in the Pacific.

Columbus fed off a relatively weak western conference in week 1, and sit 3rd in the west after 9 games. Led by RW/C Bepoleon, the Jackets will look to continue taking advantage of a piss poor Central division. Columbus sits 8th in both GF (41) and GA (39), an area they’ll look to improve on in week 2. This squad might look to add a top tier player to the fold to put them over the top, as the Central again is up for the taking. Number one defensemen Scubasteve has been a monster, putting up some very respectable numbers from the blueline. Biggest eyepopper to me is the 23:35 GA:TA. Its very, very easy to give the puck away in 3, and he’s done a fabulous job maintaining possession for the Jackets.

Minnesota, like Columbus, LOOOVES the Central; as they sit 4th in the west after a 5-4-0 week 1. Minny had some trouble scoring in week one, putting only 37 into the other net (11th in the league). They had some success defending though, as they only surrendered 38 (7th in the league). Minnesota is another top 5 possession team, sitting 4th in the league with an A/TOA of 8:58. I’ll say it until I’m blue in the face, this stat might be the only one that matters. You have the puck, you win. There are variables in between those two, but the first makes the second a lot easier to do. This squad has some skilled players, and like almost any team would benefit from adding a true #1 player to help that strong possession finally pay off. Sitting in a weak division, this team will do some work, and could find themselves battling closely with Columbus for a good portion of this season.

Literally no one. Holy piss