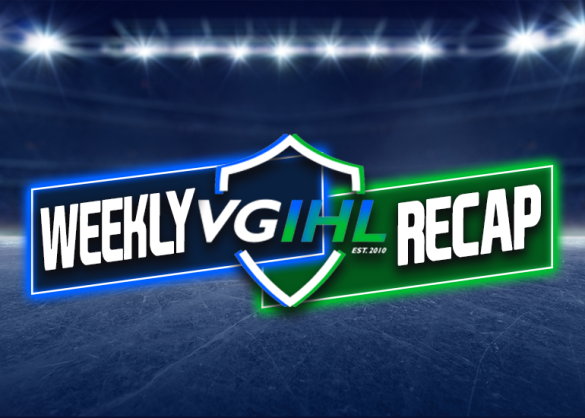 “Bent!” he screams. “What are you doing up in her’, up in her’ instead of writing? Y’all gonna make me lose my mind! The first VG IHL Recap you wrote was a hit. We need a sequel.”

“First of all, Budz, what I’m doing is taking a crap. Secondly, did you just quote….never mind. Lastly, the recap just came out. I don’t think it has a like yet.”

Budz bristles, “Take a crap? Why don’t you leave it?”

I stare at him silently until he walks out. He does not close the door behind him. Leave a crap? Well, considering the quality of my writing, I’ll leave a crap on his desk in a figurative sense when I drop off the latest recap on it.

Rogle Status: On fire…in the bad way. With their full top line unable to get together, it was a rough week out on the ice. 3-5 with all 3 wins coming against the teams at the bottom of the standings. I was surprised some of the shots we took against this team went in in the game I played. Idk if goaltending has been an issue often but Castro might need an upgrade if that’s the norm. They scored 2 goals or less five times this week!

Frolunda Status: Philanthropic. This week perfectly captured the essence of 50/50 Frolunda. Beat Rogle, killed Fribourg. Lost two close ones with most of the top line unavailable against Canada and Sweden. Annihilated USA, ff’d three in a row bc availabilities just didn’t work out, one guy fell asleep and zero PR guys were available. Teams continue to hope the Frolunda coin flip works in their favor.

Fribourg status: More plucky and battered than a chicken about to be…fried. Eh? Eh? They burned Bern and boiled the bulls but then got mostly cooked and eaten by 4+ goals in their other games. Calgross showed up for a single game, too! Take the victories where you can.

Carlstad, NJ Status: 6-2 this week. Happy but anxious. They beat all the teams they needed to but lost to the two teams they were supposed to lose to. 6-2 looks good but it won’t help them beat those top teams in the PO’s. They’ll look to show they belong in the conversation by beating Canada or Sweden as soon as week 3 starts.

Red Bulls Status: Head in a guillotine. I think they won a single game by ff against Frolunda. The injection of Bufford into the lineup against Fribourg was promising but even with the first overall pick in the draft on defense, it was an execution. The bull is red bc it’s bleeding everywhere.

Russia Status: Bombed out. Similar to Carlstad, they took out the teams they needed to, including a 6-3 win against that very same Carlstad team. Close losses against Canada and Sweden in addition to a huge win ove rrogle might have these guys feeling like their in the conversation for top 2….if only they could just beat one of Sweden or Canada next week…

SC Bern Status: Chugging along. No that’s not a reference to needing to drink to stay on this team. It’s a reference to the multiple pretty good outings they had through the week. They blew out the bulls with a huge 9-3 victory headlined by Skitzo’s 9 point performance and CharlieTuna getting 6 points. They also had FIVE one goal losses, including against Canada and Sweden. IS a .500 week around the corner?

Canada Status: Syrupy smooth. The team keeps getting into sticky situations (poor roster, close games) and getting out of them (fortuitous trade, huge wins against Russia and rogle.) Two ff games on Wednesday were followed with a way too close for comfort 1 goal win over SC Bern.

Sweden Status: Golden. If you check the results, the team that is THE standard in VG IHL has some eyebrow raising close games from this past week against Frolunda, Bern and USA. (Especially the Bern game. 5-4 W with their top guys out there. Kudos to SC Bern) But it was otherwise business as usual for the golden haired god squad. They scored seemingly at will against everyone else while winning handily. Canada didn’t want none, they ducked with a ff.

USA Status: Gritty. Save for a 10-1 loss to frolunda they stayed within 1 or 3 goals vs Russia, Karlstad (I spelt it right, finally) and Sweden! Although it was not anywhere near Sweden’s top line. Still, with a huge win against the red bulls and a bunch of close games, they can keep their heads up. Perhaps they will make the founding fathers proud with a few more wins next week as the month of America’s birth comes to a close.

That’s it for another exciting VG IHL recap. Week 2 brought us a lot of underdog’s coming up short. Will they go the next step in week 3 or get kicked back into the mud they’re trying to crawl out of. Will Frolunda finally top line Sweden, Canada and Russia? Will they finally play on Thursday? Does Rogle right the ship? Will Canada weather the Swedish storm on Wednesday? All this and more will be answered, in week 3 of VG IHL Season 5!

PNCPark2k1
This comment was minimized by the moderator on the site