VGNHL Players of the Week - Week 1 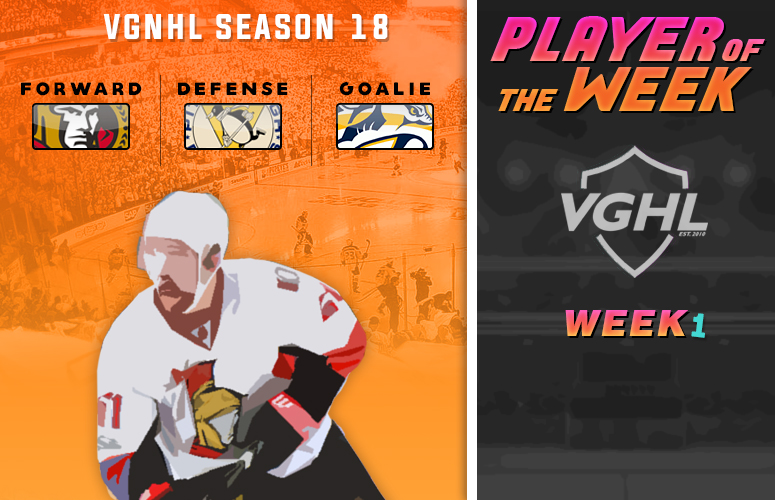 Week 1 is in the books.  The East looks strong with the top five spots in the league going to Eastern Conference teams.  LA continues their dominance in the West with my favorite Western Conference team Arizona nipping at their heels.  In the East, Ottawa continued where they left off last season, at the top of the Eastern Conference. So let's take a look at this weeks Players of the Week:

Difference conference same result, top defenseman season in and season out.   Tied for the league lead in plus/minus with his teammate Relinquished_71; stat had a hell of a week.  Putting up 15 points total, with 14 of those coming by assist.  Only had 2 PIMs in 9 games, just another reason why he is a top dman.

When you put up almost 40% of your teams goals and assist on the other 40%, I’d say you had a pretty good week.  Averaging 4 points per game,  dominating on both special team units with 5 power play goals and 3 shorties, throw in a couple game winning goals and yea shooting at 50%.  Ottawa had a strong week and so did Gucci.

Never fails, you play for Tampa you’ll have great stats probably win a Vezina or two.  But you will have to work really hard to get Player of the Week.  Look at these boys listed, it’s not just wins that determines a top goalie.  Its that really strong save percentage coupled with other stats.  No surprise that Acer is the top guy on my list.  Faced 17 shots a game and still had a .904 save percentage.  That’s beast boys, beast.  Nashville has a solid roster, but this guy is the star right now.  That 5-1 record, he worked for it.