VGNHL S19 Players of the Week 4 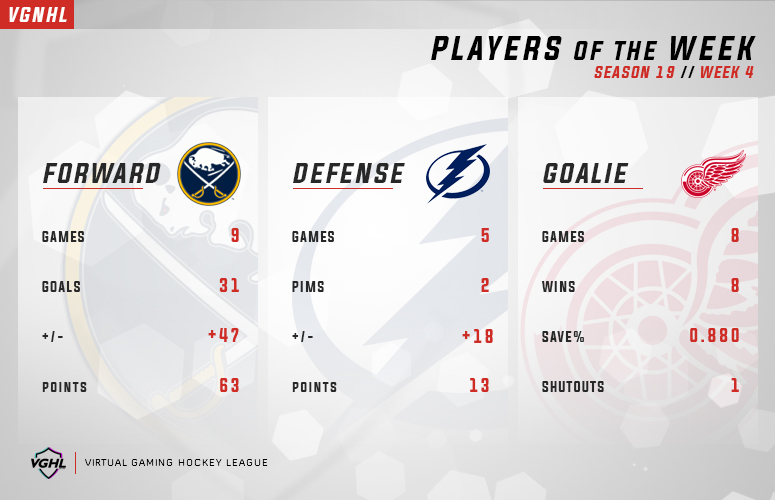 WHATS UP VGHLERS THESE ARE YOUR VGNHL PLAYERS FOR WEEK 4!

With the completion of week 4 we've surpassed the halfway mark of our 19th season. Buffalo had an explosive offensive week with their opening week 3 forwards and their new addition making them likely the strongest forward build in VGHL right now.

Newly acquired Matt made an instant impact this week after being traded from Tampa Bay last weekend. Matt nearly lead all players in all categories for the week. The front end of the Sabres line is even more dangerous than before.

Jaie showed this week how valuable he role for the Bolts has been this season. Playing a key factor in the wins against the Avalanche and underrated Blackhawks who seem to be finding their stride now. Will the lose of Matt at the start of the week Jaie and his team will likely be much more focused on strong defense team work going forward.

Another Player who begin the week in a new locker room. Cujo is filling into a much needed role that should make the Red Wings the team that most expected, and hoped for. Detroit was highly criticised for their "weaker" back end after the conclusion of bidding, but I think going forward that will no longer be the case.