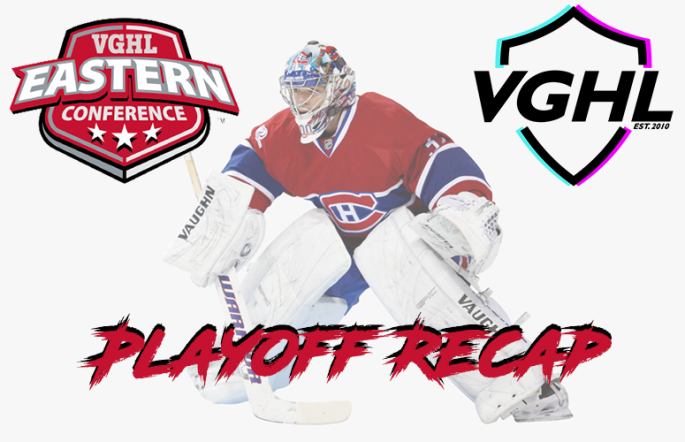 The New Jersey Devils came into season 23 as the VGNHL pre season favourites to win the Stanley Cup and they lived up to that billing going 58-1-1. They faced off against the Wild Card 2  VGNHL Boston Bruins who at 8 games under .500 still made the playoffs with a 23-31-6 record and were the worst team to enter round 1. This was expected to be an easy first round opponent for the powerhouse Devils and cruised by the Bruins taking them in 4 games for the sweep . Led by Boughss who in those 4 games had 8 goals, 17 helpers for a whopping 25 points and 6.25 points per game. What more could you ask for from your superstar player. The Bruins just had nothing to match these Devils and to be honest there isn't any team that can in my opinion.

Next up we had the Flyers taking on the Hurricanes in what I thought would go 7 games but the Hurricanes showed up and took this first round matchup in 6 games! The old VG OGs of vega, bigyan, koko, greekelite took on some of the newer generation in Brindy, Troak, iamsmokxy, DarksBackk and gave them a fight as 4 games were decided by 1 goal and 2 of those going to ot which could have easily went the Flyers way if they got a bounce or 2! Leading the way for the Hurricanes was Troak with 5 games played 7 goals, 10 assists for 17 points and a solid 3.40 points per game! Solid effort to lead his team into the second round. We follow up this series with the Tamap Bay Lightning vs the New York Rangers where I made a blind prediction in the discord without fully looking at either team and based off some of the players both teams had I said NYR in 7, i didnt really care who won isnt was a blind call and the Bolts made me it look pretty stupid as they easily took out the Rangers in 5 games! Now did I really think the Rangers would win? Maybe maybe not it was a blab but one think for sure, I definitely thought it would be a closer series and a longer one then 5! I did not see that coming lol… Leading the Bolts charge into the second round with a solid performance in the first round was Murphwizzle with 4 games played 5 goals 7 assists 12 points for a 3 point per game average with 1 game winning goal. The owner of the bolst puts in a solid series to lead his team.

The Montreal Canadiens faced off against the Panthers in round 1 and did not disappoint taking the series in a 4 game sweep. The Habs captains Mawson_99 had a big series leading his team with 7 goals 10 assists for 17 points in 4 games averaging 4.25 points per game which are big game player numbers!

As we enter round 2 we have 4 teams bursting and oozing with confidence as all are coming off huge series wins and in convincing fashion! Which teams will continue their road to the Stanley Cup? Let's find out as the Devils take on the Hurricanes in a highly anticipated matchup! Did the Hurricanes have what it takes to slow the team from Jersey? After 4 games it was evident that once again a team was no match for the Devils as they took this series again in a 4 game sweep! With availability hurting the Hurricanes due to some injuries they just were no match for the best team in the league. Once again stepping up for his team was Boughss although falling off his pace of 6.25 ppg from round 1,  which I mean is expected to drop as you go deeper into the playoffs he still put up great numbers playing in 4 games scoring 8 times helping on 7 others for 15 points with 1 game winning goal and an average of 3.75 points per game.

Flying over to another semi final matchup in the East we have the Montreal Canadiens taking on the cruising Tampa Bay Lightning in which this is another highly anticipated matchup. Could the Habs slow down the Bolts or the Bolts slow down the Habs? Turned out the Habs proved to be just too powerful in the end for the Bolts but this series did not go down without some controversy between both teams management and when I reached out for comment both declined. But hey what is playoffs without some controversial calls!  The Habs take this series and yet again convincing fashion, sending home a good team in the Lightning in just 5 games! What playoffs we have!

Facing off in the season 23 Eastern Conference Final we have the pre season favourite powerhouse the New Jersey Devils led by DudNastyy and Liljegren taking on a consistent competitive team ran by Scoop in the Montreal Canadiens who picking up jarkos aka stamkos half way through the season was huge and a great pick up for the Habs as he is a stud centre and a consistent winner and an overall great player. This will definitely help them against a team like the Habs as they have a centre capable of shutting down and going toe to toe with Boughss in my opinion. Can the Habs play the best hockey of their season against the Devils ? We are two days into the third round and once again the Devils are on the verge of a sweep as they head into Wednesday night up 3-0 after winning by scores of 4-2, 5-1, and 7-6!

Leading the way so far for after 3 games for the Devils is, oh well shit we have a different name other than Boughss as owner DudNastyy leads the way from the backend with 1 goal 7 assists 8 points giving him 2.67 points per game going plus 2 and 3-0 to lead his team as they are one win away from advancing to the Stanley Cup final and Duds second final in 3 years potentially giving him 2 cups in the last 3 season and 4 total championships in the last 4!!

Can he finish it off step on the Habs throats and advance to the final?