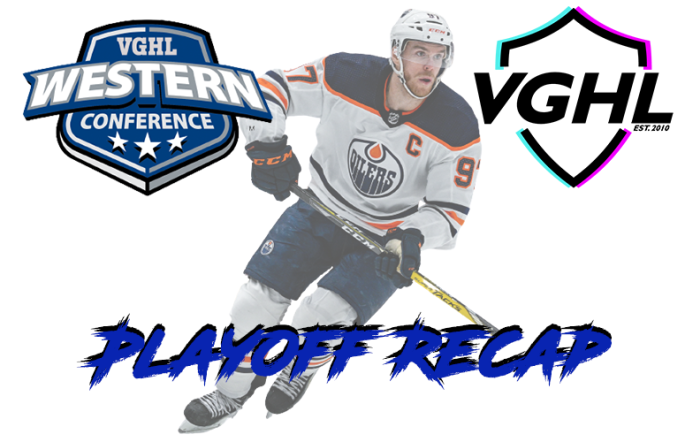 Now we turn to the VGNHL Western Conference playoffs and we have some shockers over on this side as we will start with the series and the one team everyone thought would be facing the New Jersey Devils in the finals as we dive into the first series in the West as we have the Colorado Avalanche taking on the Nashville Predators in round 1. And folks after a bunch of drama in this series involving both teams the Avs came out on top with a 4-0 sweep of these Preds who all season long said they would take out any top team as their outspoken owner believed these Avs were easy to beat. Well as he found out after 4 games and booking tee times on the golf course these Avs for at least this round were the real deal!! Leading the way in the sweep for the Avalanche was MikehTheGod and TheSilliestgoose with both having pretty much identical stats with 3 games played 3 goals 4 assists for 7 points and a 2.33 points per game. Advancing to round 2 rather easily. As we move onto the second series of the first round in the West we have the Dallas Stars against the Chicago Blackhawks. Were the SP warriors led by VG owner Castrogstar defeat these Hawks? Well after the Hawks lost their starting goalie heading into the playoffs the Stars showed up and handled these Hawks rather easily taking the series in 4 games as the Hawks could only steal one early and couldn't get any more momentum after a big game 1 win as the Stars would take the next 4. Coming up huge for the GStars in round 1 and helping his team advance to the second round was Reapz2313 with 10 goals 8 apples for 18 points in 5 games for 3.60 point per game average!. That's stepping up big as team captain and leading the way for your team. The Gshitters ;) are onto round 2. Next up we have the Edmonton Oilers vs the Vegas Golden Knights. The Oilers to start the season weren't looking like a playoff team as some early season struggles had them stumble out the gate a bit but with some moves and in season additions they definitely turned it around and became a team to watch out for in the West and against the Knights they did not disappoint as they swept Vegas taking the series in 4 games. The Golden Knights who were a pleasant surprise this season tried to put up a fight but the Oilers were just too much to handle as they took each game by at least 2 or more goals and leading the Oil charge was none other than the Oilers captain Hxrdie- who in just 3 games put up 10 goals 4 assists for 14 points and a 4.67 points per game to go along with 1 game winner. Talk about leading the way for your team and stepping up when they need you. These Oilers are off to round 2 and riding a high wave of momentum. Can they keep it going? We shall. Now for the final series in round 1 out West we had the Vancouver Canucks facing off against Arizona and longtime owner PNC! Could the return of another longtime VG member in heroic sautner spoil the Coyotes playoff party ? My answer just like you all know is yes they did! And in more convincing fashion then i thought they would as they took care of business in just 5 games! A shocker to me for sure. Helping his team take care of the Yotes and moving on to the second round was three_eleven07 as he put up 9 goals 3 assists 12 points for a 2.40 points per game to also go along with 3 game winners! Talk about coming up clutch for your team and taking 3 wins off the blade of your stick! Huge performance from three eleven here in the first round for his Canucks!

Well there you have round 1 folks now a 5 min break and on to round 2….

Round 2 starts off with a highly anticipated matchup between the two best teams in the West throughout the regular season as the 1st place Avalanche host the 2nd place Dallas Stars in what ends up being a shocker as I believe most of the community didn't see this result coming. As the Gstars stunned the VGHL community and a Stanley Cup favourite in the Avs taking this series in 6 games and shutting down a great team in the Avalanche. Stepping up in round 2 for the Stars was Lecupidon who after a few seasons away from VG has returned and is leaving his mark here in these playoffs as he had 5 goals 8 assists 13 points with 1 game winner and a 2.17 points per game which by playoffs standards is a great performance. Take note that Reapz stepped up huge and clutch when his team needed that big goal and potted 3 game winners himself, Rumour has it the Avalanche dealt with major availability issues here in round 2 and that the Gstars got lucky? Is this true? Are the Stars for real or did they just get lucky and take advantage of the Avs issues ? I will leave that for you to decide. Either way they are off to the conference final!

Lets see who they will face in the West Final and who stands in their way of reaching the ultimate goal, the Stanley Cup final?

We have the Edmonton Oilers taking on the Vancouver Canucks with some old VG old timers taking on a mix of some new and old VGHL’ers as both rosters feature some names that give you a blast to the past like CCpiper, jewofcanada, heroic, SE7VXN, SMOKESHOW and plenty of other noticeable names! The first 4 games of this series were mightly different as the Oilers came out blazing, taking the first 2 by scores of 5-1 and 5-1 but the Canucks didn't cave and came right back with two big wins of their own! And this series looked to be headed to seven games but the Oilers decided they had enough and stepped on the Canucks throats taking 2 closer games and finishing this one off in 6. Helping his team reach the conference final was the great CCpiper who came out and had a huge series leading his team with 5 goals 10 helpers for 15 points a 2.50 points per game average 1 game winner and showing the VGHL community he still has some great hockey left in him! The Oilers uner jew and Hxrdie advance to the West final to square off against the Stars for a berth in the Stanley Cup final!

Let's enter the West final and I believe we have two teams who before the season started would have called you crazy picking these two teams facing off to go to the finals! But here we are and the Stars are once again proving people wrong and have a stranglehold on this series up 3-1 against the Oilers. Can the Oilers make it a series and comeback and force this one to 7 ? We shall see but in order to do so they need to slow down the SP warrior duo of Reapz and Lecupidon who both have 11 pts respectively thru 4 games with Lecup having 2 game winners and really making his mark in his VG return! Do the GStars close it out tonight @ 10pm est? Or do the Oilers come up with 2 huge wins and force a game 7? Find out tonight as it all goes down! Who advances to take on the powerhouse Devils for the cup??????? Who you got VGHL?

Enjoy some great playoff action tonight as always it should be exciting and intriguing!