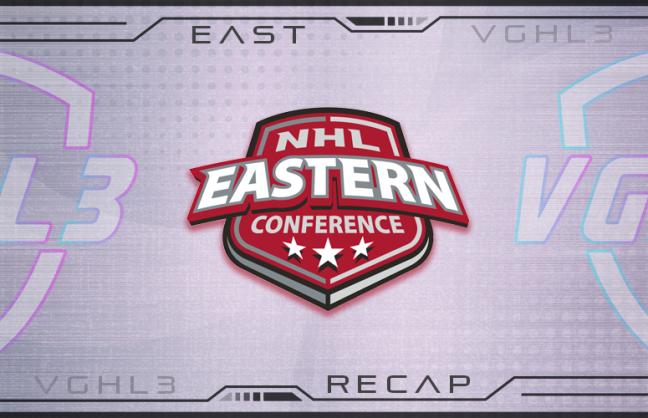 We’re back to the most requested weekly article pairing in vg history!!! Welcome to the Chapel. We’ve got new ownership out in the East, a team selling the farm, and a team in the Atlantic trying to make this a race. Let’s dive right in and see what’s up!!!!

Welp. Airbus lasted longer here than toofly did, but no knock to him, you get these poorly constructed teams and rarely anyone wants to play on them. No fault to Airbus, he did the best he could, and I believe he shouldn’t be blacklisted for bailing. Taking ownership of a 1 win team isn’t easy, and is setting whoever takes ownership up for failure right off the bat. Should there be more lenient sentences in scenarios like this? Or is Airbus punishment appropriately allocated? Nonetheless please welcome Columbus’ 3rd owner of the season. KillaVanilla!

Player of the Week: KillaVanilla 4 games played, 12 goals, 9 assists for 21 points. The one bright light for this downtrodden Columbus team

These boys are trying their hearts out to keep up with Tampa Toronto and Carolina and a 5-4 week keeps them close. They are currently 7 points back of 3rd place Tampa Bay  in the Atlantic, but Tampas 7-2 week puts their division race on hold. As it stands right now, the capitals have a firm grip on the last wild card spot and are slated to play Florida if the results hold out. Obviously they would much rather play Carolina in the first round, but a playoff berth with the team they have is nothing to be ashamed about.

Player of the Week: Slapshot_77 5 games played 2 goals 21 assists. Looks like Washington has found a 2 way defender in their locker room and he’s helping them succeed.

Tampa keeps on climbing the standings, ever since their slow opening week, it seems as though they have put their past demons behind them and are ready to exact revenge on messiahs devils of last season. It’s safe to say these guys are playing playoff hockey and we still have 2 weeks left. Keep an eye on Tampa as every other team in the East is currently on upset alert come playoff time.

Player of the Week: Slabaugh04- 8 games played 7 goals 21 apples for the man from Motown, if only he played actual hockey, the real red wings could use his two way play.

This team is so wishy washy, one day they’re playing like cup contenders, the next they’re playing like Columbus. It’s all a part of the process though as messiah has been tinkering with line combinations all season to get ready for Tampa bay and Toronto. Biggest hurdle for them so far is the ability to close out tough games. They hang and they hang, then one minor slip up sends everything into oblivion.

Player of the Week:  CompleteLuck72 once again. The 2 way god. Luck has been a bright light for this wishy washy team, and without him, who knows where we’d be.

A team that has kind of underperformed in expectations. They are 100% better this season than last, but the availability bug has hit them a bit and has caused the Atlantic race to be closer than it should be. As it stands right now, Carolina is 2 points behind them (pending 2 forfeit wins from Carolina last week) but the kicker is that Toronto has 3 games not input. Vs Minnesota on Tuesday, July 19th, vs Columbus on Friday, July 22nd, and Buffalo, July 30th. So who knows if 2 of those are going to count as wins. If they don’t and they only get the Buffalo game, Carolina will be 4 points back and the race for the Atlantic gets that much more interesting, they play their final game against Carolina on the 5th of August.

Player of the Week: xWillis—. Good to see the kid back here. 5 games 10 goals 19 assists. That’s a solid 5.8 points a game, and you’ll likely win those games if he keeps producing numbers like that

Ego sold the farm, granted it wasn’t a very prosperous farm, but he shipped Clark off, gained an inactive in nash 61, and kept big little guy. Very odd maneuvering, considering that big was there all season, and doesn’t get a trade to a playoff team. There’s not much to praise about this team other than they are still playing. So I will give props to them for that.

Player of the Week: BigL1ttleGuy, nothing super spectacular, but again. I’ll give props to the guy… he’s sticking it out. Big. I’m sorry man, but you’ve changed since last season, at least now you’re getting the spotlight you deserve.

Another team that also tried to sell the farm, I am going to emphasize tried because they had 2 trades that were deemed unacceptable by the league. The first was shipping off llayton to Winnipeg for nothing but scraps, then sending cmess over to Winnipeg for mikeh. The last trade isn’t as bad as the first. But still lopsided nonetheless. I don’t know what’s going on in Boston or why shady is trying to sell the farm, but a rebuild was trying to happen in Boston before the trades got vetoed.

Player of the Week: llaytxn 2 games played but holy crap. 15 points. For a whopping 7.5 a game. That’s unreal, good thing he’s still on Boston, because of that Winnipeg trade were to go through, that total might be at 12 a game.

While one team slides, Montreal keeps rising. They now have a stranglehold on at the very least, 3rd place in the Metro, in fact, they are now tied for 2nd in the division and are fighting for home ice advantage in the first round. The newest additions of daoust and bedard have significantly bolstered this Canadiens roster and have given them hope to try and get to the second round this season!

Player of the Week: RampyHockey 8 games played 11 goals 16 assists. Leading the way for the Montreal Canadiens. Good for the guy. Hopefully he can keep that performance up against stiffer competition come playoff time.

Only holding onto second place by a goal differential of 62 to montreals 0, Detroit had benefited early from their goaltending, now, their scoring has suddenly taken the forefront of their attack as they have been lighting it up the last 2 weeks. Boy oh boy. This Montreal Detroit first round matchup is going to be the matchup to watch come first round, and might go 7 games.

Can anyone stop these kids? By far the best team in the East over this last stretch of games and it’s just been physical physical physical. I don’t know when teams are finally going to pick up that they play big. And they strive off of the 2 on 1s caused by miscommunication and disruption of plays using the body. Can someone say Eastern Conference reps in the Stanley Cup?

Player of the Week: Goes to the man with another 1st star… BoomNorthShore. 9 games played. 9 goals. 28 assists. 118 hits on the week. Cmon now. It’s just not fair. To say he’s a solid two way player is an understatement.

Week 5 should be a great litmus test for these top 6 teams, to see if gaps can be closed or expanded and I can’t wait! It’s going to be a great 5th week, and even better close out of the season! Until next time, this has been your messiah to the vg3s universe.