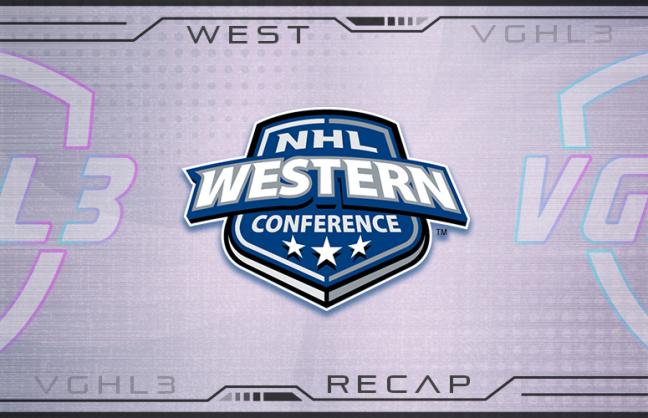 The trade deadline has passed although we can’t see all the trades yet. I got traded so I can write about myself and pretend to be relevant, meanwhile the playoff races are heating up as we come down the stretch. Who will rise? Who will fall? Who will do nothing at all? Did the Calgary Flames actually win a game???  It’s time to find out.

I’m running out of metaphors about flying. So this week the Jets once again did something planes do very well. Unsurprisingly they extended their lead over the rest of the Western Conference. The Jets are the clear cup favourites and in a best of 7 series I don’t think anyone can take 2 games from them, let alone 4.

Top Performer: CapitalsFan_08- 23 G, 16 A, 39 Pts, 7 GP- It’s not Champo, which just on its own is incredible. Huge shoutout to my boy Caps for outplaying the leading Hart candidate. Keep up the good work!

Will the Ducks fly or fali? My honest guess is the latter, but it’s hard to tell when they barely play. 5 forfeits (No idea if they were wins or losses. Need update @vg staff) you’d really like to see teams showing up a hell of a lot more. This lack of preparation by this many teams is quite simply unacceptable. Even for the summer season.

Top Performer: Hipposarecool34- 5 G, 20 A, 25 Pts, 7 GP- Having played in every game they played it’s not very surprising he led the team in points. Nonetheless a very respectable performance.

HONEY, I’M HOME! I’m going to break my normal rules about self-reporting and absolutely pump the hell out of my own tires. After a long season in Buffalo myself and my 6s Captain JRush were sent to the Vegas Golden Knights to help them on their playoff push. I’m super excited and looking forward to seizing this opportunity.

Top Performer: DaVyrus13- 12 G, 11 A, 23 Pts, 4 GP- Cyrus as we affectionately know him had one fantastic week during a time of significant roster turnover. According to multiple sources Beast and Yung got into a verbal scuffle for the ages so they were booted and during that turmoil DaVyrus came in and carried. Good on him.

The Kings had a HUGE bounce back week this week going 7-1 (1 no game) and absolutely beating the stuffing out of their opponents outscoring them by 33 goals. This team has quietly emerged after a very quiet start as a legitimate title threat. I expect big things from them.

Top Performer: EasyxMoneyx- 15 G, 15 A, 30 Pts, 4 GP- Easy Money was just that this week, Easy Money, an absolutely phenomenal showing in his 4 games which proved absolutely massive as his team worked their way up the standings. If he keeps up these performances this team could easily finish top 3 in the Conference.

2-7 on the week? Yikes. I understand why someone on this team told me not to review it this week. So I won’t.

The Vancouver Canucks were yet another team that had a horrendous week on the ice. Combining for just 22 goals in 8 games isn’t going to get you many wins and their 1-7 record shows that. Nonetheless this team is nested safely in the playoff picture so no harm, no foul.

When the only team you beat all week has basically folded twice on the season you know you played atrociously. The Oilers did exactly that this week but somehow managed not to slide in the standings at all. I’m shocked this team hasn’t made more moves to strengthen their roster when they are performing as awful as they are, and just to be clear, trading for Yung and Beast after their meltdown in Vegas DOES NOT constitute improvement.

Top Performer: Yung96- 13 G, 3 A, 16 Pts, 4 GP- Their top performer this week is Yung but I’m almost positive most of these games were played for Vegas. I’ll be quite honestly shocked if he lasts long on the Oilers.

The all-but-folding Stars appear to be adding themselves to Playboi’s graveyard of bungled seasons in rapid fashion as they can barely manage to show up for games let alone win them. I have said it before and I’ll say it again, in my honest opinion playboi shouldn’t be management in any league ever again. It’s pretty clear he’s just in over his head. At the rate these Stars are falling I doubt they will even make the playoffs.

Top Performer: mcgsean- 3 G, 4 A, 7 Pts, 5 GP- Oof marone this team is terrible and their best player having just 7 points all week proves it. Surprised Sean hasn’t quit to be quite frank. All things considered however your top performer is who it is. Congrats.

The Minnesota Wild had a 2-6 week. Which somehow has them closer to a playoff spot than when the week started. Just 3 points back of the Stars who are having a meteor shower-esque fall down the standings the Wild should be able to surpass them in the remaining 18 games quite easily. They still won’t make it out of the first round but in my opinion that’s worth at least a little recognition.

Top Performer: Scrueyouhippy- 4 G, 5 A, 9 Pts, 3 GP- If this kid starts playing more the Wild will make the playoffs, mark my words. 3 points per game isn’t much but with a little help that’ll win this team some games. They don’t ask how, they ask how many.

THEY DID IT LADIES AND GENTLEMEN THEY WON A GAME!!! All jokes aside, the effort put in by Troy and Blake to get this team just to show up for some damned games is worth noting. This team honestly might even be able to squeak into the playoffs, but let’s not get our hopes up too much just yet. I want to personally give a shoutout to this team’s management for their response to adversity when they, well, sucked. Good job boys!

Top Performer: The_Kintz- 10 G, 13 A, 23 Pts, 5 GP- You begged the whole league to stop blowing out your team with top lines and while most of the league scoffed at you some teams were dumb enough to do it and you won a few games. Jolly good show buddy. That right there is what virtual hockey is all about. Leading your extinguished Flames to the promised land that is a win.

As always I hope everyone agrees with me and any team that isn’t Anaheim (You know what you did) is welcome to spam my DMs if you see any errors or omissions. I look forward to watching the race for last now that most of the teams appear capable of showing up to games which believe it or not helps a lot with winning them. I will see you guys next week when I tick off even more people with my crude humour and brutal honesty.